This article was originally written by James Chung, Gemma Liang and Matt Liao of FiiO Electronics Technology Co., Ltd. and was published on Weibo in Mandarin on the 30th of September.

With permission from FiiO, our editor Beng Yeow translates the article to provide readers with further insights into the FiiO M9.

“Bucket Machine”, a term coined by Lei Jun of Xiaomi during the unveiling of the Redmi Note 5 on the 16th of March, 2018. Since then, the concept of “Bucket Machine” has become a familiar term in the digital circle. The term “Bucket Machine” can be contrived from the bucket analogy; The amount of water which a bucket can hold does not depend on the longest piece of wood in the construction of the bucket, but on the shortest piece, this is also known as the “short-board effect”.

The same can also be applied to audio devices. The composition of components in a device is often a mixture of various grades and more often than not the component of an inferior grade often determines the overall competency of the device. Therefore, when a certain device is termed as a “bucket machine”, it generally means that it is a device that is well-balanced in all aspects with no obvious shortcomings. 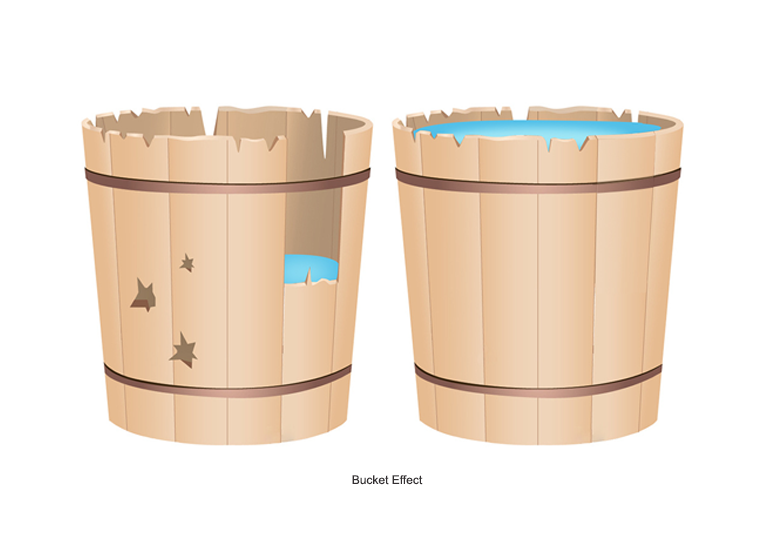 So why do we have to create a “bucket machine”? Since the introduction of our first high-performance Hi-Res music player, the X3 in 2013. We have received numerous feedbacks from customers. Two of the most prominent points recently include “Can you incorporate a Qualcomm 845?” and “Can you equip the device with a higher resolution display?”. Such feedbacks reflects that while they are satisfied with the sound quality of our players, but they continue to seek improvements in terms of user experience. 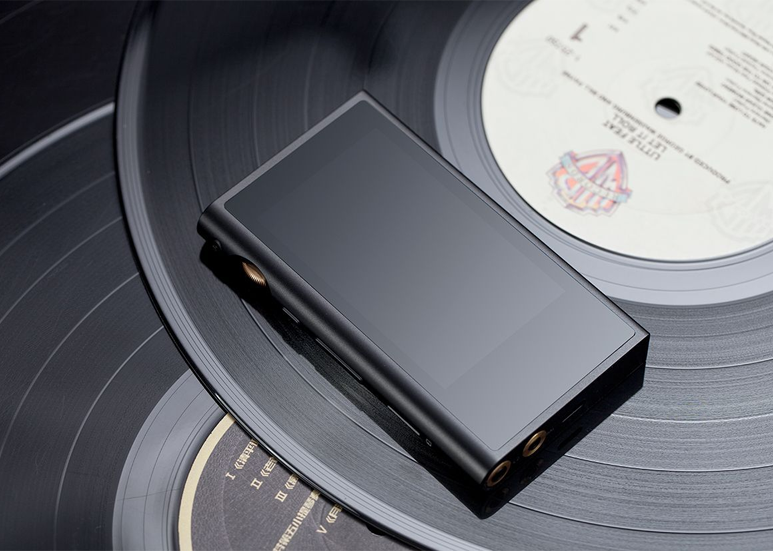 As a product designer, it is also our wish to create a product that is superior in all aspects. After 5 years of tireless efforts, the team delivers what is in our opinion an all-rounded DAP – the FiiO M9.

Next, we look at the M9 from all aspects to justify why it is recognised as the “Bucket Machine” of Chinese DAPs. With smartphone manufacturers removing the 3.5mm headphone jack from their devices,  Bluetooth is fast becoming the connectivity of choice for audio, fueled by the availability of lossless Hi-Res Bluetooth codecs. With support for aptX HD/LDAC and HWA whose standard exceeds that of CD-quality audio, the M9 offers the most comprehensive coverage for audio playback via Bluetooth.

When connected to the PC to function as a USB-DAC, one could use aptX HD or LDAC to transmit music wirelessly through Bluetooth. The M9 is the first DAP to offer this functionality. 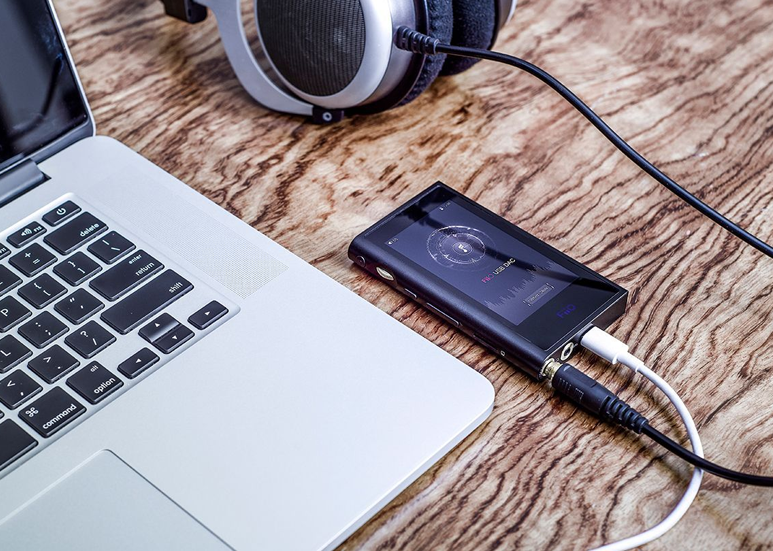 In terms of sound quality, the M9 is benchmarked against the company’s Flagship Bluetooth and DSD-Capable DAC & Amplifier, the FiiO Q5. Following extensive internal and external testing, the team is of the view that the sound quality of the M9 matches 90% of the benchmark. 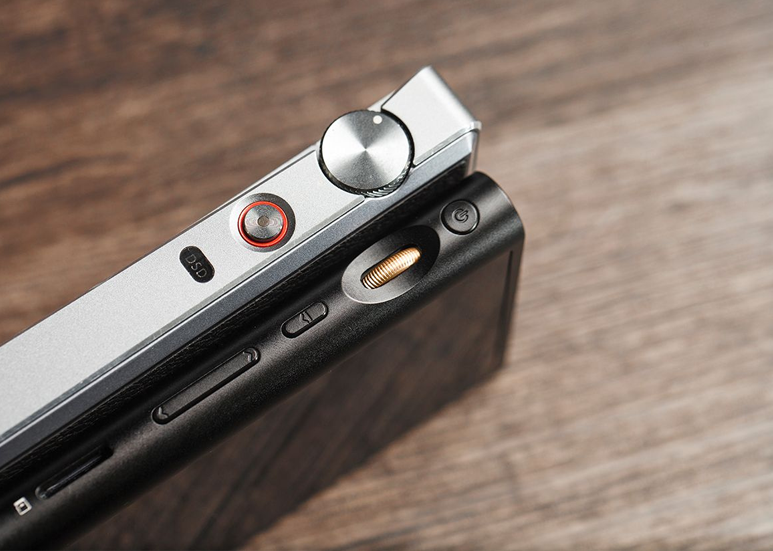 M9’s ability to achieve such good sound quality stems from the use of excellent internal components which includes polymer tantalum capacitors from Vishay which features ultra-low equivalent series resistance (ESR), making them ideal for power and audio applications. Architecture wise, the M9 still adopts the traditional structure comprising of Processor, FPGA, DAC, low-pass filter voltage amplification and current buffer. The DAC configuration sports two AK4490EN DAC chip coupled with precision chip resistors, to ensure that each channel is processed independently with very good consistency while the portable amplification features Ti’s current Flagship OPA1612 coupled with two OPA1622; Adopting a 8-layer 3-stage HDI PCB process, the engineering team is able to achieve a PCB that is only 0.8mm in thickness, with 4 layers dedicated to the power supply system while realising the ultra-low impedance of the power supply as well as the ground circuit within a narrow space; coupled with three independent partition shields to better realise the isolation of digital, analogue and radio frequencies. This contributes to significant enhancement to the anti-interference ability of the device which naturally translates into good sound quality with clarity. The use of such a classic architecture coupled with meticulous use of components is an exhibit of sincerity by the team when crafting the M9.

As a player designed for enthusiasts, M9 features a 2.5mm balanced output, a 3.5mm single-ended output, an S/PDIF coaxial output as well as a USB-Type C interface. Not only does the M9 feature WiFi, but also has the ability to transfer music files over WiFi, playback music files on PC over the network via DLNA, as well as access millions of music files on the cloud via the built-in NetEase Cloud Music App. The USB-Type C interface on the M9 supports full digital audio output up to 192kHz/24bit as well as DSD128 output via DoP/D2P. In addition, M9 can also be connected to the PC through the USB-Type C interface to function as a USB DAC, providing asynchronous 192kHz/24bit output both wired and wirelessly. The M9 sports a very small footprint which can be easily fit into the palm. The size and weight of the device are in line with the essence of the portable player. This is only made possible by the implementation of Samsung’s Exynos 7270 Dual chipset, an advanced 14nm FinFET process which was only recently adopted by smartphone manufacturers featuring two Cortex A53 cores clocked at 1 GHz each. Coupled with the implementation of a double-sided packaging process, the M9 adopts an L-shaped layout process similar to the one adopted by Apple’s iPhone XS, allowing the potential of high power output from a small footprint. 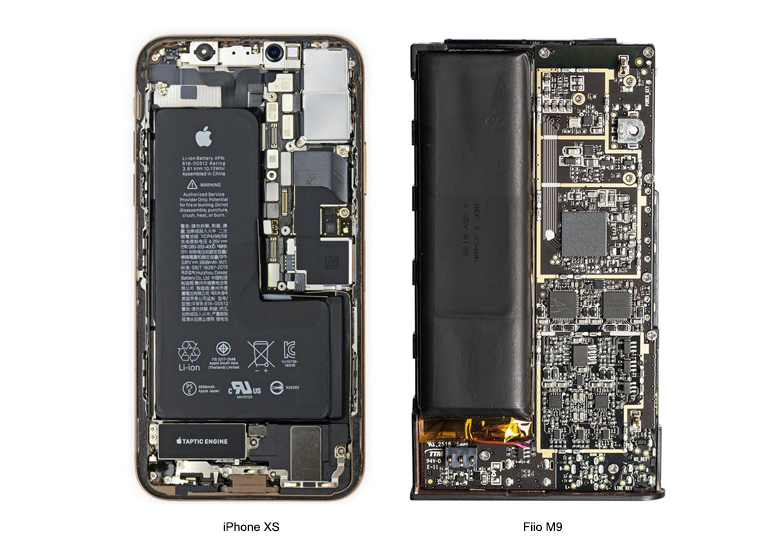 There are few offerings at the sub USD 300 price point that can match the display found on the M9. It uses a 3.2-inch 480×800 resolution IPS full-colour touchscreen display which is more vivid and appealing. Attached with a layer high-strength glass of Asahi Glass from Japan, the black glass and black aluminium alloy body converge seamlessly as one when the display is off. Gestures have always been an essential part of the portable UI experience, the M9 unlocks with a swipe from the bottom allowing access to the main interface and the drop-down menu from the top of the screen, similar to the implementation found on the iOS. Made possible on a Custom Android OS, the gesture experience on the M9 is arguably one of the best at this price point. 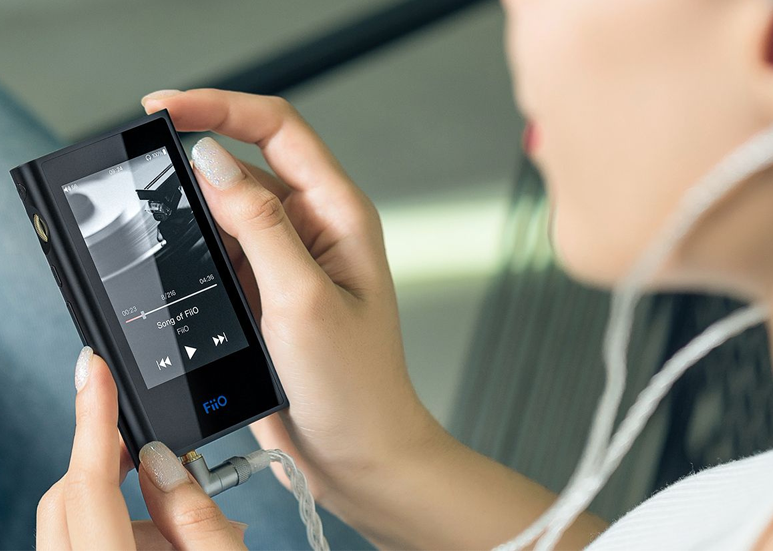 The FiiO X5 III and X7 Mark II are flagship products of the company and have won many domestic and international awards, however, these two products also have a common Achilles heel – short standby time. Many users were discouraged by this issue, an issue which we took time to identify the difficulties and overcome them. In addition to improving the device’s standby time and battery life, we want to prove that the Chinese DAPs can finally start to use the processor from the first-tier manufacturers. 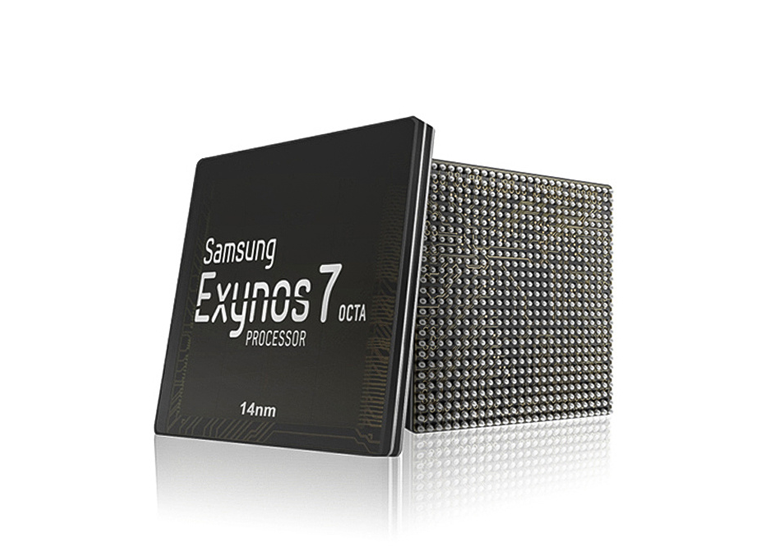 Individuals who are familiar with smartphones may know that prior to the launch of the FiiO M7, Samsung’s Exynos range of processors has featured prominently in its line of smartphones, outside Samsung, Meizu is the first major Chinese manufacturer to feature the Samsung’s Exynos processor on its Meizu PRO 6 Plus smartphone. Since Samsung’s processor is so attractive, why is it rarely implemented in smartphones and digital devices from Chinese manufacturers? This can be attributed to the availability of a large number of software providers (such as MTK, RK, etc.) in China, ensuring many options for everyone. It is therefore not necessary to delve into the Samsung platform which is not open to third-party suppliers. Even though we are not able to see results in the short-term, the company still invested significant human capital to embark on the project. Two years into the project, the team is delighted to implement Samsung’s Exynos 7270 Dual chipset in our new products. Taking advantage of SiP (system-in-package) and ePoP (embedded package-on-package) technology, the Exynos 7 Dual 7270 stacks the AP, DRAM and NAND flash memory chips as well as the PMIC (power management IC) allowing more space for the battery. This effectively improves and reduces heat-related issues arising from the use of the device, thereby greatly enhancing the standby time and battery life. 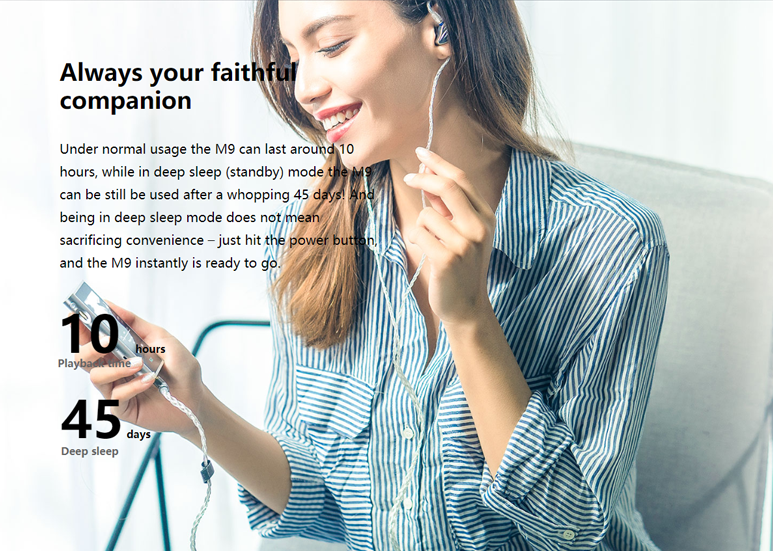 How to obtain recognition is a big problem in a variety of products. When designing the exterior form factor of the M9, the designers followed the concept of the application of golden section and symmetrical design.  The most commonly used volume wheel on the side of the M9 is located at the golden section of the upper body. The positional relationship between the power button and the wheel is also the golden section distribution. This position distribution ensures visual comfort and proves the rationality of the golden section it is also easily manipulated with one hand, which is very suitable for carrying.

Click here for more insight into the design philosophy of the FiiO M9.

Another highlight of the M9’s interactive design is its unique RGB light indicator display. Different colours inform the user of its current working state. When playing Hi-Res audio and normal audio and different Bluetooth codecs, the colour specification of the FiiO logo can clearly indicate the specifications of the current audio playback. If one does not need the light indicator display, it can be turned off by turning the brightness setting to the lowest level.

The sound and colour are complete, the “Bucket Machine” of Chinese DAPs. We have reason to believe that the M9 in the price range of USD 300 will exceed the performance of any music player.