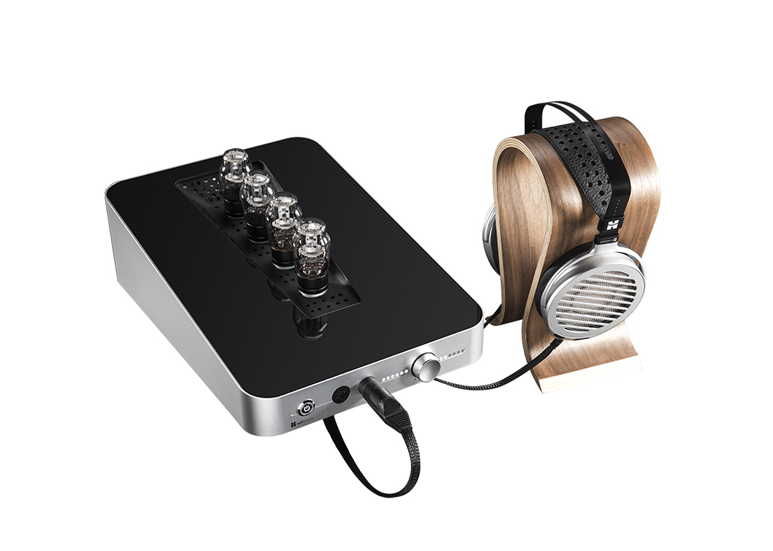 When it comes to headphone systems, the mention of SHANGRI-LA directs one to a USD 50k peak that is pretty much out of reach, an electrostatic statement piece for HIFIMAN. Sharing the namesake as the flagship, the jr. is said to have inherited the same technologies as its more esteemed senior. These included the nano-particle coated sub-one micron thick diaphragm; precision 50-micron wire mesh stators; and nanometre thick dust cover to prevent arcing.

Porta-Fi was invited last week by Eng Siang International Pte Ltd and AV One (S) Pte Ltd to audition the SHANGRI-LA jr. , where it was paired with the Chord Blu MK2 transport and the Chord Dave DAC using cables from Chord and Isotek with the latter’s products also used for power conditioning.

With the SHANGRI-LA jr. headphones spotting a similar look and feel of its recent offerings, it is the tube amplifier unit that left me an impression at first glance. The tube amplifier now measures 400 x 265 x 108mm, 16.9% the size of the sr. which measures 438 x 459 x 336mm, and weighs in at 11kg which is 5kg lighter than the sr. The unit features four 6SN7N tubes, without a schematic, I am unable to determine if the tubes being dual triode tubes are configured to be parallel for each channel or two as driver tubes and two as output tubes. Regardless of how it is configured, the four 6SN7N tubes are unlikely to provide sufficient gains which suggest that the tube amplifier unit is likely to be a hybrid in nature, featuring additional solid-state amplification circuitry before the tubes as HIFIMAN has remarked that in the jr. system, the headphones are directly driven by the tubes. The unit also features a discrete 24 step attenuator for volume control, a component I truly enjoy using throughout the audition. Weighing in at just 374g, the SHANGRI-LA jr. headphones is lighter than the SUSVARA (450g) and features a similar headband design, however, the time around, HIFIMAN has opted for a coated gloss black finish. Being light-weighted, the headphones are comfortable for extended listening, my only gripe is that the headphones lacked the build quality of the tube amplifier unit and it was apparent.

During the audition, I used my Astell&Kern A&ultima SP1000 as a digital source outputting to the Chord Blu MK2 via USB. I had the luxury to run through my reference tracks twice, once via the RCA (single-ended) input and another via the XLR (balanced) input. The overall experience confirmed that the SHANGRI-LA jr. headphones continued the HIFIMAN’s tradition of being one of the most inefficient headphones in the market, this is especially evident when playing tracks with multiple bass or strings where sound imaging and separation suffers when listening via the RCA input but not the XLR input.

On a first impression, the SHANGRI-LA jr. headphones are transparent, clear and airy with a wide soundstage, it, however, lacks the dynamism and the coherence of the SUSVARA. At USD 8,000, the SHANGRI-LA jr. does look value for money when considering that the number of technologies it inherits from the sr. The amplifier unit features two PRO BIAS connector for its headphones output which means the amplifier unit and headphones are not mutually exclusive to each other and caters for compatibility with other electrostatic offerings.

On the basis of the first audition session, I am looking forward to spending more time with the HIFIMAN SHANGRI-LA jr. and explore the set more for a full review, at the same time I would encourage those who are in the market for an electrostatic headphones system to have a listen.