Interview with Colum Fraser of RHA 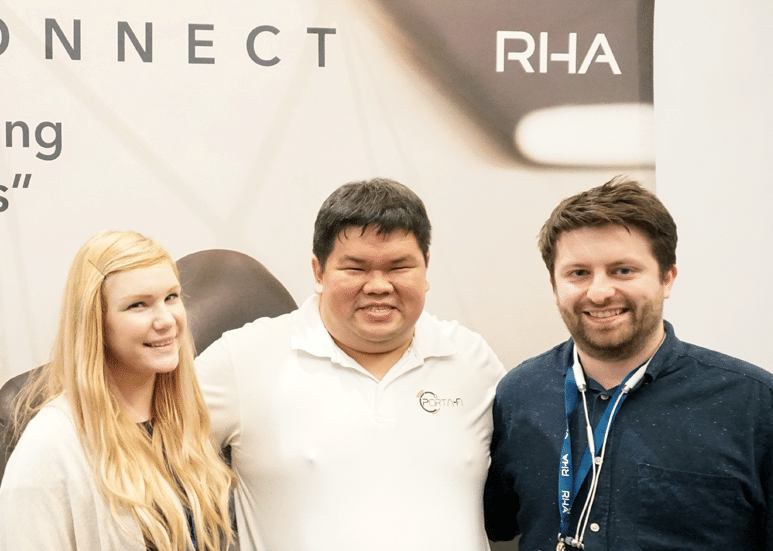 RHA is an independent audio company based in Glasgow, UK. The year has been an exciting one for the company, having released the RHA CL2 Planar, the RHA TrueConnect and most recently the RHA T20 Wireless headphones. Colum Fraser [CF], Marketing Manager of RHA was in Singapore and we caught up with him to find out more about RHA, the CL2 and TrueConnect.

[BY] Hi Colum, Welcome to Singapore. The year has been an exciting one for RHA, having recently released the CL2 Planar and the TrueConnect. Could you start by telling us more about yourself?

[CF] I have been with the company for 4 years now, well almost 4 years. I joined as just a kind of social media guy and then now I am looking after a lot of the marketing and day-to-day stuff. It’s been such an exciting company to be part of because of the fact that I am have been there for 4 years, I have been there for half the life of RHA, it’s only an 8-year-old company. I am from Glasgow anyway, so it’s really exciting for a tech company in Glasgow, you don’t need to move to London or Hong Kong or New York.

It is a really cool place to work because the audio market has been so exciting for the last particularly three to four years. Prior to that, it is just kinda arms raised to who can make the best and most value for money wired headphones and that fight has been going on for the last 20 years. But the last three to four years, its been kind of, ok, make it more convenient, implement Bluetooth better, make it last longer, make it more resistant to rain and sweat. It is not just about building products that sound great, its also building products that you can use anywhere and use to do anything. People used to just listen to music on these things, now you need to make for calls, make it work with Siri, make it good for the podcast, so that’s been really exciting.

It is really a good team of people to work with, a lot of us are very close, it is really a very nice company to work for. I love music, I love the podcast and I really like technology, this job allows me to have all that.

[BY] Could you tell us more about RHA? What does RHA stand for?

[CF] RHA used to stand for the founding principles of the company, now we are just called RHA, it is a brand which we kind of got attached to. The real name of the company is now RHA Technologies Ltd, we could have rebranded but it would have been quite an exercise.

[CF] One of the reasons we took so long to develop it was because we wanted to get that sound the best. Unlike the TrueConnect, True Wireless is an essential product which we need to make to meet market demands. The CL2 is the complete opposite end, we made it because we really wanted to, like it was a thing we just wanted to do, to see if it can be done.

Our Director of Product, Kyle Hutchison, is a guy who loves playing with speakers and then taking things apart and putting them back together. He is in love that Planar sounds with the really tight bass, like very powerful but at the expense of nothing else and he wanted to make that sound in a headphone so it is really down to that and taking that principle and engineer that in 9 to 10mm and that took us a long time, took us 4 years.

It was something we, first of all, needed to get the mechanics right, we needed to make sure that we can build something using that method and make it sound right and then it was refining, refining and refining that sound until we were happy with that it was acoustic kind of a planar headphone or a planar speaker that we were familiar with. That took a long time, and then we designed a kinda housing around that and then tweaking basically what that did to the sound. We used zirconium ceramic which is an incredibly durable compound.

The CL2 program is basically a proof kinda that we still very much are interested in advancing technologies, using things that people haven’t really thought of before, at least for in-ear headphones.

[BY] Bundled with a Braided Ag4x silver coated cable: MMCX – 2.5mm balanced, a Braided oxygen-free copper (OFC) cable: MMCX – 3.5mm and a SecureFlex Bluetooth® neckband: MMCX, the CL2 has one of the most complete sets of accessories in the box. Why did the company decide on such a bundling?

[CF] The CL2 is one of these things where no single element of it is being compromised. We had to use the best materials, it had to look perfect. You need to have all these cables with it, in order, you can use it anywhere or with any of the equipment you have.

[CF] It belongs to a segment which, I mean like three years ago, there was no True Wireless market at all, then the AirPods came out and then everybody else came out. All of sudden, it’s more of what we sell basically which is the TrueConnect. It is amazing! We kinda expected it to be a bit more gradual. RHA has been around for 8 years now, for the first 5 years, we were just doing wired headphones and then 3 years we brought out our first wireless headphones. Since then, the segment of the market buying wired, neckbands and true wireless are completely reversed.

When we first make Bluetooth headphones, the reason we waited so long to make them is that we wanted the quality to be up there because we thought consumer won’t accept a cut in audio quality just because they can not have a wire. To a certain extent, that was right but actually, its more and more now, people are about convenience first than quality, like the sound quality. Whereas we are trying to kinda match all of those things at the same time all the time, build quality, sound quality, convenience.

It is not easy if you want to make something that is better than anyone else, making a good one is a challenge. True Wireless is one of the things that a lot of consumers and companies are finding out is that True Wireless is a completely different offering than a Neckband Wireless. On a Neckband Wireless implementation, you can fit the battery, a DAC, a Bluetooth chip and you still have a lot of space. On the True Wireless, it is all happening on the headphones which is a lot smaller, you need to pack a lot of electronics together which can mess with connectivity, and it is another two or three inches away from your phone and that makes a huge difference sometimes particularly for some True Wireless headphones in the market. The difference in connectivity or non-connectivity, people find that for True Wireless, simple changes like keeping your phone in your left pocket or right pocket makes an utter difference how good that connection is. The convenience is there now, for a lot of people the quality is there as well but over the next few years, we will just see how the quality creeping up to match convenience for True Wireless. There will be new battery technologies, there will be new transmission technologies. It is exciting.

[BY] I have noticed that the TrueConnect only supports Bluetooth 5.0, what was the team’s consideration when developing the TrueConnect? Was aptX considered and why was it not included?

[CF] I think for us, the consideration that we do with TrueConnect is, we wanted it to be a good price, a very competitive price, we wanted to combine the build quality and sound quality that people have come to expect from both from us and from True Wireless and at the same time, a battery life which is very good. This is 5+20 hrs. In order to keep all of those things in balance, we didn’t get aptX in this one. It is probably something a next-generation True Wireless product will have. Just in order to balance battery and price, and just cramping all that electronics into that very very small space, it just wasn’t something that’s feasible for the TrueConnect, which is a shame. We have to choose what our priority is when we are making a product and for the TrueConnect, we chose stability and convenience.

[BY] Is there any further insights from RHA that you would like to share with the readers?

[BY] Colum, on behalf of our readers at Porta-Fi, I would like to thank you for an insightful session. We look forward to more exciting products coming from RHA.

I would also like to take this opportunity to thank Eng Siang International Pte Ltd for facilitating and arranging the interview.

Interview with the Engineers of the Sony Signature Series